There is not a single market in Metro Vancouver in which a median income is enough to afford a detached house, according to data compiled by a home search website.

The struggles of buying a home are well known in the city itself, but the problem extends through surrounding cities, a blog posted by Zoocasa Wednesday suggests. The least affordable markets are Vancouver West and West Vancouver, the site says, but the median income is short more than $100,000 a year in many of the region's suburbs as well.

The website, which features properties both for rent and for sale, looked at the benchmark prices for detached houses and condos, and calculated the minimum income required to purchase and maintain the homes. Data was gathered for 21 markets in Metro Vancouver to determine which areas had the largest affordability gaps.

Required incomes were then compared to the median household income in each region based on data from Statistics Canada. Scroll down or click here to view the results on a map.

The market with the highest benchmark detached home price, a factor calculated based on data from the Real Estate Board of Greater Vancouver in August, was Vancouver West at $3,278,500. In order to afford a home of that price, the household income required is $450,292, Zoocasa said.

However, the median market for those living in the area, which includes Vancouver's downtown core, is $65,327 – a difference of $384,965, which Zoocasa described as "gargantuan."

When looking at the gap between required and actual income, West Vancouver came in second at nearly $300,000. Richmond was ranked third least affordable of the markets examined with a gap of nearly half that of West Vancouver's at $173,000.

North Vancouver and Burnaby South rounded out the top five. Would-be buyers are short at least $100,000 in 11 of the 21 markets examined.

Most affordable markets for detached homes

The market with the smallest gap of those examined by Zoocasa was Maple Ridge, where the median income is about $35,602 short of what is required to afford a detached home at $870,200. Pitt Meadows ranked 20 out of 21, and North Delta and Bowen Island also had a gap of less than $50,000. Ladner was considered the fifth most affordable of the markets in the data examined.

North Delta and Port Moody, which ranked 19th and 6th least affordable, had the highest actual median income of the markets examined, while South Surrey and White Rock (9th least affordable) had the lowest, about $30,000 less than the wealthier areas.

The income required to afford a home was calculated based on Ratehub's mortgage affordability calculator, which assumes a buyer is able to provide a 20 per cent down payment, and includes a utilities cost of $100 a month.

Benchmark prices are based on a calculation of the typical home in an area, excluding extreme high- and low-end properties. Benchmarks take into account the typical size of home, as well as type, features, age and more.

"Single family homes, generally speaking, are beyond the reach of most households that don't already have very significant savings or a home of their own," University of British Columbia economist Tom Davidoff said.

"Condos – it's a stretch, but as a median income you can sometimes find them affordable in paying about a third of your income in rent or mortgage costs."

Viewing the Zoocasa maps in this article on a mobile device? Tap the images to view larger versions and read the breakdown of numbers.

Benchmark condo price also out of reach for many

Using similar data and resources, Zoocasa also looked at the average income required to buy a benchmark apartment in the same markets.

Again, West Vancouver and Vancouver West represented the top two least affordable markets in the region, with income gaps of $77,930 and $52,595 respectively. The benchmark for a condo in West Van topped $1.19 million, and was $825,000 in the western half of the City of Vancouver.

Also among the top five were Burnaby East, Burnaby South and Richmond.

The regions Zoocasa found most affordable of those examined were Maple Ridge, North Delta, Ladner, Port Coquitlam and North Surrey.

Based on the site's calculations, homebuyers purchasing a benchmark property in those markets would actually have an income surplus of between $13,000 and $29,750.

"They see the prices and what they can and can't afford. They start to move further and further east – Burnaby, Surrey, Maple Ridge – until they finally find somewhere they can afford," he said.

"There definitely are some people who decide, 'This isn't the right time for me.'" 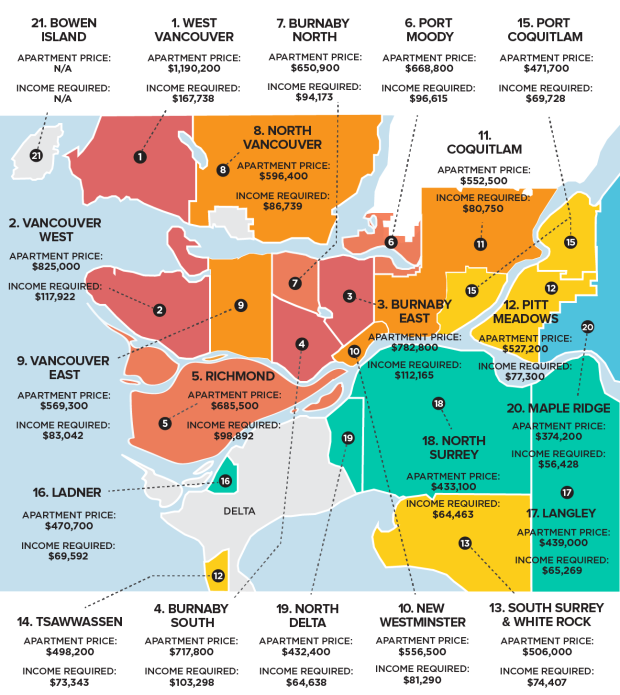